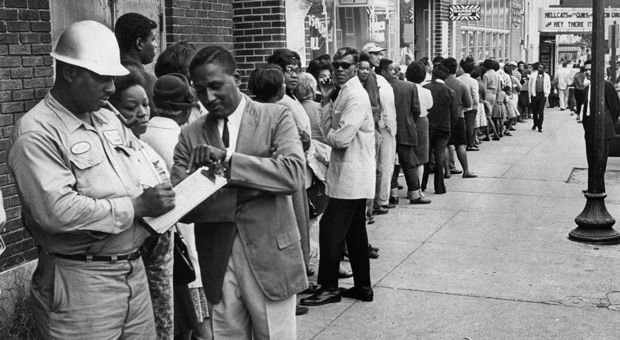 BENZONIA — Earlier in my life, I lived in Charleston, S.C. and spent almost four years roaming the South as a journalist. Later I did the same thing as a national correspondent for the New York Times. In the 1980s and 1990s, the South was emerging from the dangerous era of segregation that had allowed — by state authority — white people to abuse black people in virtually any way that whites thought was necessary to sustain their sense of comfort and superiority.

But even as a child, I was keenly interested in civil rights and racial injustice. When I was only eight years old, I clearly remember when Goodman, Schwerner, and Chaney were killed in Philadelphia, Mississippi in 1964.

Mississippi and every other Deep South state had established a separate and unequal culture and economy, and enforced it with state-sponsored intimidation and violence. States used poll taxes and questionnaires to discourage black adults from registering to vote. Whites supported the enterprise, helped by lies uttered by elected leaders and conspiracy theories about the horrendous consequences if blacks succeeded in gaining the lawful right to vote. Years later, as Mississippi Senator James Eastland insisted, whites were only trying to prevent Negroes from voting.

Sound familiar? There’s more. In the winter of ’65, sensing an opportunity to attract more national attention to the triple crown of desegregation, equality, and voting rights, Martin Luther King Jr. led weeks of marches and demonstrations in and around Selma, Alabama. Black adults stood in line for hours, sometimes days, to register to vote. They were shadowed by armed state and local police. It was a dangerous gambit. Two civil rights activists, one black and one white, were killed. Hundreds were injured by police and white vigilantes.

In those years, John Herbers, the great New York Times correspondent covered the marches and demonstrations of Freedom Summer and wrote the first stories after the bodies of the three civil rights activists were found buried in an earthen dam. I worked with John during my days in the Times’ Washington bureau.

In his book, “Deep South Dispatch,” published in 2018 a year after his death at age 93, John described the intensity of white resistance to black registration. “Desperately trying to maintain a system of black suppression, white segregationists created a world rife with rumor, fabrication, and paranoia. They were convinced that black men were determined to rape white women and that black restaurant workers contaminated their food. They believed rumors that the NAACP instructed maids to harass employers by hiding valuable items so they appeared to be stolen, giving the lady of the house a moment of heightened concern and fear.”

Three generations later, many of the same principles that motivated white southern society — and the strategies they deployed to defend segregation and impede free and fair elections — look very similar to what President Trump, his party, and his supporters are doing right now. The goal is identical: Preserving white society’s view that its heritage and values are privileged and superior.

Think about it. President Trump deployed federal security forces to attack peaceful demonstrators and provoke a response that produced hours of video that is now a staple on rightwing TV. Trump argues without logic or facts that Joe Biden is a tool of leftists intent on destroying America.

Trump has made it clear he supports suppressing the vote in November. He makes up conspiracy theories about the security of voting, criticizes the legitimacy of absentee voting, and inoculates himself against the likelihood that he can lose. If he loses, the vote is illegitimate, he says. Then Trump directs his appointees to systematically dismantle the capabilities of the United States Postal Service. Just today he issued a lie about voter drop boxes, insisting they could aid in the spread of Covid-19.

In other words, just like the segregationists, Trump is prepared to do anything — no matter if it’s illegal, unethical, immoral, or deranged — to influence the behavior of voters who idolize him and control the means to vote. His party and his followers support his indecency at every turn, dismissing criticism and public protests as the work of people determined to “destroy America.”

The Selma campaign and the climactic March to Montgomery in 1965 galvanized the country, opened registration to millions of black voters, and eroded the foundations of southern segregation. George Floyd’s murder in May, the protests that followed, the spreading deaths from the Covid virus and its economic consequences have converged. The result is a similarly determined campaign to command history.

Democrats produced an eight-hour virtual convention last week that displayed an America that was recognizable, embracing and encouraging about justice, fairness and leadership that merit enduring support. During the same week, millions of Republican Americans did not tune in because they were too busy listening to and supporting the toxic leadership and intolerance that is ruining our country. That is also readily recognizable. Ask any African American who has lived through decades of such miserable behavior in the Deep South.

The Democratic Convention revealed the rest of the nation’s thirst and energy for a powerful American pivot to facts, fairness, decency. Goal Number One: defeat the president. Goal Number Two: launch a new era to address and solve the systemic challenges we face as a nation and as citizens of the world.

The Democratic Convention issued a call to arms to end the Trump presidency with an antidote — clear thinking, truth, equality, and capable leadership . Our responsibility now is to close the deal and vote.

In U.S. Big Ideas Prompt Big “No!” In China, It’s The Opposite

One thought on “Voter Suppression, Racism, Conspiracy Theories, Stolen Elections – We’ve Seen It All Before”