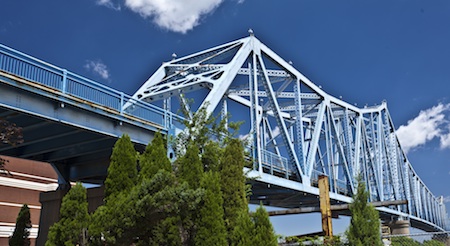 I’ve been working in Owensboro, Ky. this summer on What’s Done, What’s Next: A Civic Pact, a three-part project to help the city understand the new velocity of change in the 21st century and suggest ways that will lead to prosperity and a high quality of life.

Right off the bat, it’s important to note how different Owensboro’s attitude about the future is from much of the rest of the country. Owensboro is in transition, to be sure. But its vector is pointing up, not down.

That’s not the case in too many other places. The public mood is so hollowed out that Americans have settled on a single word – “dysfunctional” – as a polite way to describe the ideological fanaticism, political ruthlessness, and economic heedlessness that has made the intrinsically messy process of governing the nation unbearable. Similarly fierce conflict and feckless results also characterize the brand of democracy that has taken hold in Frankfort, Sacramento, Lansing and most other state capitals bullied by deficits, slashed programs, and demoralizing layoffs.

Indeed dysfunction and disinvestment define much of America’s painful era of national reckoning and stagnation. But not all of it.

It turns out that American democracy still works at the local level, a select group of big and small cities and counties. The reality of day-to-day civic needs – street repair, garbage collection, emergency services, construction permits, contracts – tends to temper political combat, reward insightful and strong leaders, and replace ideology and revenge with shared values and some measure of common decency.

The local governments that are widely regarded as setting the gold standard in municipal management – Chicago, New York, Denver, Charleston, S.C., Chattanooga, Grand Rapids, to name a few – also are defying the tax-cutting, investment-starving economic logic of the times. They are spending taxpayer dollars on new transit systems, housing, schools, research centers, parks, city-wide Internet access, college scholarships, inducements to attract entrepreneurs, and any number of other public programs and civic equipment to leverage private investment. All are performing much better economically than the states they are in.

These cities, managed by capable elected and appointed officials and supported by pragmatic residents, understand that spending on public assets is one of the principal tools for encouraging a strong business sector, generating good jobs, and providing for an economic culture that provides personal safety and financial security.

That, of course, is the same formula that built America in the 20th century, but which is being abandoned in Washington and state capitals. It also is the formula that Owensboro embraced over the last six years under Democratic and Republican leadership, and which in the last two years produced almost 2,400 new jobs, more than any city in Kentucky.

That statistic, by itself, provides a persuasive argument for Owensboro to be included in the short list of small cities considered among America’s best, a distinction that Money Magazine, Forbes Magazine, and several other well-regarded periodicals already recognized over the last year.

As we learned in Chapter One of What’s Done, What’s Next: A Civic Pact, Owensboro is building its next era of economic competitiveness on these basic pillars of American progress:

1. Investing in public schools and higher education institutions to both build a durable economic sector that employs more people with good jobs in Owensboro than any other sector than health care, and to develop a skilled and educated workforce that is strengthening existing businesses and attracting new employers.

3. Promoting art and music, and providing financial incentives to attract dynamic employers who, in turn, will recruit high-I.Q. and goal-oriented employees.

4. Promoting science, health, and new research and manufacturing practices, chief among them the promising plant-based pharmaceutical contract work at Kentucky BioProcessing, to push the boundaries of innovation and elevate Owensboro’s brand as a premier place to live and do business.

Strong Leadership
Still, there is one more critical facet of Owensboro’s progress that is neither well-recognized nor well-regarded in the city or in Daviess County. And that asset is how effectively both jurisdictions have been managed in recent years, and how they’ve learned to cooperate and collaborate.

Those features of local governing have done more than produce budget surpluses in an era more commonly defined by deficit. They prompted the city and county to jointly approve a tax increase on local insurance policies in 2009 that provided $80 million in funding for far-reaching downtown development projects. They’ve enabled Daviess County to invest $6 million in a local 27-acre campus for Western Kentucky University that includes a 30,000 square foot, wired-for-the-new century classroom building that serves hundreds of students and where 40 people are employed.

Smart decision-making and surpluses also provided the wherewithal for Owensboro to provide $14.5 million in incentives and grants to enable the U.S. Bank Home Mortgage Company to expand its facilities over the last year and add 500 new jobs, although those jobs are not downtown.

Just as importantly, Owensboro’s Mayor Ron Payne, a Republican who endorsed the re-election of Democratic Governor Steve Beshear, and Daviess County Judge Executive Al Mattingly, a moderate Republican who once was an independent, are civil to each other in public, and in private are said by colleagues to have found a way to work together. That has helped accelerate the pace of decisions, an important competitive advantage that unlike big-ticket infrastructure projects, doesn’t cost anything. The two ran against each other three years before in the Owensboro mayoral race.

Describing the city and county governments as well-managed, of course, is certain to generate either dismay or howls of laughter in the quarters of the community familiar with the back-and-forth, missed opportunities, unexpected decisions, and the other actions taken by elected leaders that one or another group considers foolish.

For instance, Jeff Barber, the chief executive of the Owensboro Medical Health System, sourly recounts five months in the late summer and fall of 2009. That was the time that it took the region’s largest employer to secure from the city commission and the Metropolitan Planning Commission’s Board of Adjustment the zoning changes and conditional use permits needed to start construction on a $385 million hospital. The hospital, he said in an interview, fit the requirements of the regional land use master plan and was less than two miles from its current downtown location. “It baffled me,” Barber said.

If the same proposal to move a big downtown hospital, though, was made in Pennsylvania, Ohio, or any of a dozen Michigan cities, the public process to decide on zoning changes and permits could easily consume years, and end up with a decision to deny the new location.