KNOXVILLE — From his office on the fifth floor of the Knoxville City County building, Dave Hill looks across the Tennessee River to 350 acres and more than two miles of riverfront. None of it is enchanting. Yet all of it essential to this mid-size southern city’s plan to be a green, clean, energy efficient, and lovely statement about America’s capacity to build the century’s new world class urban centers.

As my Manhattan mother might say: “Knoxville? Where’s  Knoxville?”

But that’s just the point. It’s the Knoxvilles of America that are as crucial to determining the design of the nation’s urban form as are the Chicagos and New Yorks and Seattles. And this city, the home to the University of Tennessee, the center of a five-country metropolitan region of 670,000 people, and growing 13 percent a decade, has some very ambitious, even outsize plans. It wants to transform the “south waterfront” along the river into a new district of homes, businesses, parks, walkways, and a new UT satellite campus connected to the main campus across a handsome foot bridge.

Knoxville, though, is far from the only mid-American regional city thinking about transformative investments of real magnitude. And in each of these cities the focus is on walkability, energy efficiency, access, environmental quality, healthy living, parks and open space; the ecological, cultural, and economic assets that serve as the feedstock for urban vitality.

Twenty acres at the center of Salt Lake City are being torn out and rebuilt as the City Creek Center by the Church of the Latter Day Saints. The new development will promote downtown living, shopping, access to recreation and modern office buildings, all of it bissected by the city’s TRAX light rail line.

Boston is building the Rose Fitzgerald Kennedy Greenway above the buried highways of the Big Dig, and in the process is transforming a very old New England city into an even more modern metropolis that people are rushing to invest in for housing and businesses.

Tulsa is proposing The Channels, a high rise district (see pix) perched along the existing city and in the flow of the Arkansas River. The new district, proposed by a local foundation last September, is “designed to propel the region past its competitors’, by promoting healthy lifestyles. I first read about it on a fine blog, Brand Avenue. 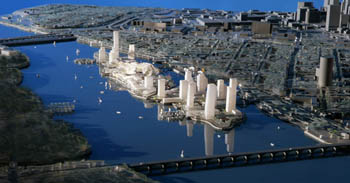 Think about it. In my lifetime, the central premise of making American cities better has completely changed. As a kid I watched our city leaders, emboldened by federal dollars, tear down the oldest, most historic, most walkable, most urban parts of White Plains, New York. For much of my childhood, the leveled area remained a lifeless plain of empty lots. It’s since been replaced by a windowless mall where shoppers have been grievously injured in senseless crimes, and block after block of completely ordinary square office buildings so distanced from each other that walking is impractical.

The plans that Knoxville, Tulsa, Boston, and Salt Lake City are busy executing speak to different values and a modern operating system that thinks about what really makes people comfortable. And that includes building clean and green, but in a way that cultivates architectural excitement and spatial intimacy. These cities are putting the civic equipment so essential to great cities — especially homes and offices and shops — closer together, not farther apart as they did 40 years ago.

Historically, the south waterfront in Knoxville was where the city put heavy industry, oil depots, and working folks who lived in neighborhoods tucked in between what are now acres of land cleared of their old warehouses and factories. Knoxville’s no-nonsense Republican mayor Bill Haslam saw the area differently and asked Hill, a planner and public administrator to head up the south waterfront planning project. Several years later, with the help of Portland scenario planner John Fregonese, the Knoxville South Waterfront is envisioned as a place of Vancouver quality urbanity, complete with narrower streets, compact neighborhoods, pocket parks, space for business and retail that is reachable on walkable paths including one that hugs the shoreline, much like Portland’s walkways along the Williamette River.

So far several condomimiums have been built and the city is negotiating to move some of the industrial businesses, including propane and oil depots. There’s one more value that Knoxville and the other cities have embraced. Patience.  Hill says that completing the South Waterfront will take at least 10 years and perhaps a generation. That’s good, he told me. Cities take time to build right.