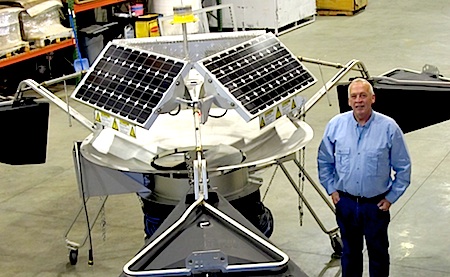 Joel Bleth, a lawyer and engineer who co-founded Solar Bee, a very successful Dickinson, N.D.-based manufacturer of solar-powered equipment to circulate wastewater at treatment plants, sent a message here today asking how long the oil and gas boom in his state would persist.

Dickinson, a prairie city of 18,000, has grown more than 10 percent since the turn of the century and for several years has experienced swelling markets for retail and office buildings, hotels and motels, and housing. Much of that is related to the Bakken shale oil and gas boom, centered in Williston 132 miles north, but which is steadily surrounding Dickinson and other communities closer to the border with South Dakota.

I interviewed Joel (see pix above) at the Solar Bee plant last month. He’s one of the rare executives in the alternative energy sector in what is now the fourth largest oil producing state.

My reporting in the United States, and from three other continents in the last few years, clearly indicates that the Bakken development, as well as drilling in the Tyler and Three Forks shale formations, which lie above and below the Bakken, is very likely to persist for at least a generation.

Production in North Dakota (see pix below by Scott Terrell) has already reached 500,000 barrels per day and, according to industry executives and state oil and gas regulators, will reach 1 million barrels daily within a year. The Bakken contains some 22 billion recoverable barrels, say state officials. The two other shale reserves also contain billions of recoverable barrels, they say. 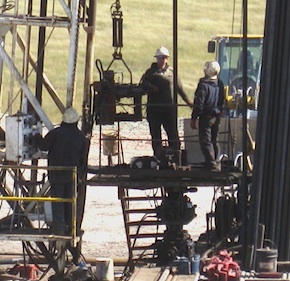 Moreover, the market for the crude oil and natural gas pouring out of the energy fields of the northern Great Plains, which includes Montana and two Canadian provinces, is huge and growing. While it is true that U.S. demand for crude oil has temporarily declined in recent years, largely because of the Great Recession, demand for oil in China is rising fast.

The Energy Information Administration said that the growth in China’s consumption in 2010 and 2011 represented almost 40 percent of the increase in world oil demand during the two-year period.

Having spent weeks in China during four trips from November 2010 to September 2011, and having reported on energy, water, and China’s soaring economy, I saw no evidence that China has any plan other than accelerating its development. China, which last year overtook the U.S. as the largest energy consumer on the planet, is also now the largest market in the world for grain, cars, coal, steel, cement, glass, chemicals, trucks, trains, construction equipment, power plants, dams, etc. The risk to the United States and the global economy from China is that it’s growing so fast, any number of factors — commodity shortages, price increases, inflation, domestic unrest, droughts, floods — will cause Chinese markets to implode.

Barring that, China will continue to drive the market for oil, a global commodity. And as North Dakota and the other big shale oil production fields in the United States expand, helping to lead the U.S. out of recession, the improved domestic American economy will also prompt higher consumption of oil and gas. So for those reasons, and others, it’s my conclusion that the Great Plains energy surge will persist for decades because the resource is there.

Joel, though, sent the chart below comparing gold and oil prices over time:

“How long will the high oil price and corresponding drilling last?” he asks. “The answer depends on whether the price of oil is being held up by (a) demand for fuel, now and in the future  vs. (b) oil is a commodity being purchased mostly to hedge against inflation.

“The chart comparing gold to oil prices over the past 5 years seems to confirm, with other info on oil use, that demand (neither present or future) is not the driving factor in the price of oil, and that oil is just another commodity that money has flocked to for protection against inflation as the governments around the print money to solve the debt crisis.

“If demand for fuel is keeping oil high, than a general economic recovery will make it go even higher since fuel usage will go up.  If, as I suspect and the attached chart would indicate, oil is just another commodity being purchased to hedge against inflation, then when a recovery occurs that same money holding up oil now will probably be moved into the stock market (more reactive to the 70% of economy driven by consumers), and then oil will fall.  In that case this drilling would end in perhaps 2-3 years instead of 40 years.”

Interesting thesis but I don’t think it’s going to turn out that way.

More reporting in this series:

One thought on “How Long Will North Dakota Bakken Boom Last? Decades Due To China”