My writer’s life occurs principally in two media arenas. One is the reporting I do for the New York Times and other mainstream press that involves structuring the gathered facts into a narrative that is purposefully designed not to have a point of view. My focus is delivering expertise in a 1,000 to 3,000 word package distinguished by studied detachment.

The other arena is the public interest journalism I prepare for the Michigan Land Use Institute. The idea is to dig just as hard for facts and knowledge but to deploy a different part of my intelligence, spirit, and experience to the outcome. In public interest writing, unlike reporting for the mainstream media, a primary goal is develop sufficient perspective to provide understanding, to inspire, to motivate, and to tell entirely new narratives about what is possible when smart people embrace a new idea.

I find that at the ripe age of 50 I’ve attained an ease in simultaneously stepping through both worlds. What’s interesting, though, is the difference in how I start projects.

My assignments for the mainstream media generally begin with a couple of phone calls and an hour or two with Internet search engines. But with the public interest work, which involves joining land and communities, I start with a flyover on Google Earth. As a tool for discerning patterns on the land, I haven’t found one better. 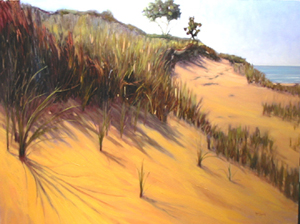 Late last month I began a project with a group of advocates in the Saugatuck region that involves making the case to conserve about 20 miles of Lake Michigan shoreline between Holland and Douglas, much of it undeveloped and among the most surpassingly beautiful stretches of sand and freshwater dunes in Michigan. The first important product of the project is a white paper I’m preparing that will, among other things, make the case that conserving the natural character of the coast line is an economic imperative that helps to ensure the region’s competitiveness in this century. The other major point I anticipate making is that the natural coastline and the rural lands just inland form a logical region, and that preserving its integrity will require local governments to see it that way and collaborate.

The essence of both points is made clear on Google Earth, especially if you have the Virtual Earth 3d plug-in from Microsoft. Sweeping across the Saugatuck region on Google Earth reveals a panorama of blue water, dun colored dunes, and green forest that surround the inviting villages of Douglas and Saugatuck. No other Lake Michigan shoreline this close to Chicago provides such a clear distinction between the natural landscape and two human communities. That’s why so many people in Saugatuck, Douglas, and the surrounding townships are intent on ensuring that this very special place retains its character.

As part of my research I wanted to see how to better apply the Google Earth capacity, and found the Live Maps/Virtual Earth team’s blog, which describes how technicians and intellectuals and planners and others are using the technology. Check this site out for gaining insight into a tool available to anybody and not possible for ordinary Joes like me until this century.

The point is that the American Mode Shift is under way, in part because technology is providing us with new tools to develop fresh perspectives about where we live, and what we are doing to diminish or improve our places.

One thought on “Live Maps And New Perspectives”