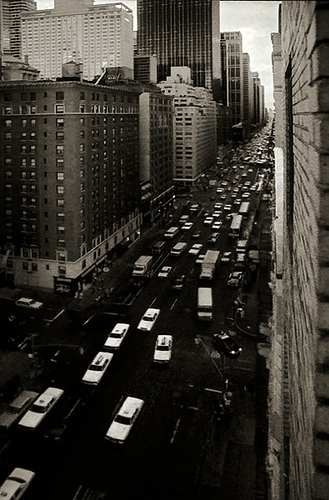 This fourth installment of Flip, which tracks keen new convergences between urban affairs and new media technology, was suggested by Joe Mielke, an IT professional and a colleague at the Michigan Land Use Institute. It’s Google’s recently introduced tool to track  urban congestion in real time, and available now in New York. Click the traffic link on the top right of the page.

The applications for this tool are immeasurable. If you’re swinging up the New Jersey Thruway from D.C. it’s possible now to call this tool up on your Blackberry. Lincoln Tunnel looks tight? Try the Holland or the GW Bridge. Better yet, you’re in Philadelphia and need to get to New York. Traffic is tough. Take Amtrak out of 30th Street Station.

I’m looking longer term. The same technology that enables Google to measure traffic flow over such a large region could also be applied to new construction permits, and new homes and businesses actually built. The GIS information systems already provide the software capacity. Data is available in many jurisdictions on a weekly and monthly basis. Google could tie the systems and data together to give residents an accurate picture of development patterns over time. Each new building could be represented by a tiny blue dot that appears with every permit approval. Over time the various constellations of dots would indicate the speed, location, and density of new development, a more graphic and urgent picture in most cases than residents can obtain by just looking around.

Wonder why traffic is heavy and getting worse? It’s not just the number of vehicles. It’s where they come from. Google’s creativity and technical capacity could add a new narrative that prompts greater public insight into the where, how, and why of development trends and of traffic.