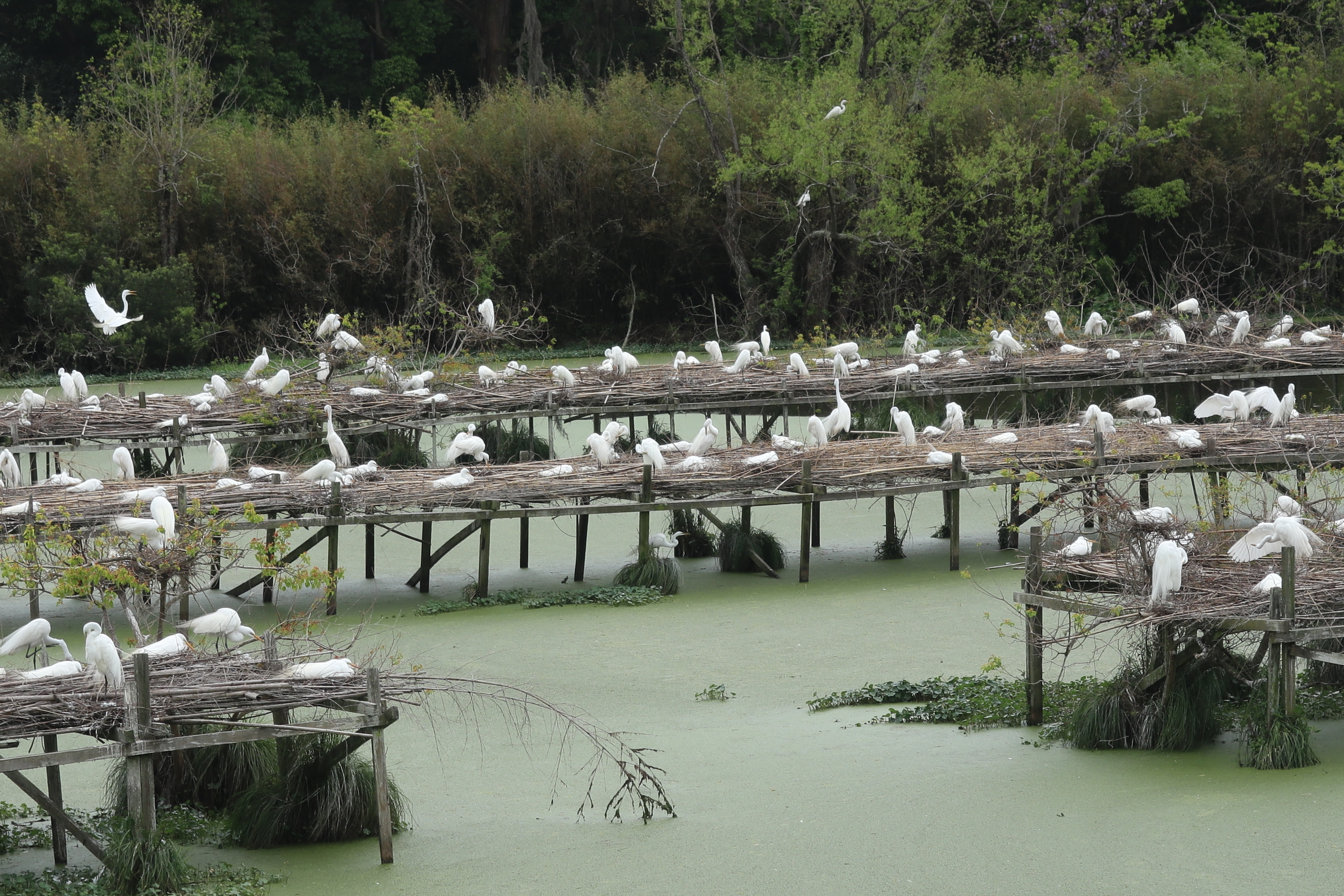 LAFAYETTE, LA —Avery Island, which draws its name from a family that settled here in the 1830s, is renowned for the Tobasco hot sauce brand that Edmund McIlhenny invented after planting pepper seeds amidst the live oaks in 1865. Another historic breakthrough credited to the family is the work his son, Edward Avery McIlhenny, accomplished in safeguarding much of the island’s subtropical landscape as a conservation preserve and especially with the rookery he built to protect Snowy egrets.

In increasing the island’s egret population from under ten when he started in 1895 to over 100,000 by 1911, McIlhenny pulled off one of the great species preservation feats in American history.

Avery Island is on the National Historic Register for its role in American commerce and conservation. It’s one of the surprising delights I encountered during the few days I was in the Lafayette area while on the way to Houston to report for ProPublica. The story of American ecological preservation is always defined by the confrontation between natural values and industrial business principles. It’s been that way since Thoreau spent all those weeks on Walden Pond. It’s been that way since John Muir and Teddy Roosevelt camped in the Sierras in the weeks prior to formally establishing Yosemite National Park.

And it’s been that way along coastal Louisiana. Though in few regions of the United States has the challenge between preserving nature and pursuing industrial riches been nearly as fraught as it is here. The men and women of the Louisiana Gulf Coast put fishing, bird refuge, alligator wetlands, and farming hard up against oil exploration and chemical production. During the 20th century it was a mismatch.

My work in Louisiana over the years principally focused on the consequences paid by communities and coastal wetlands from chemical plant emissions and rapacious oil industry production practices. The trips to the Gulf Coast were examples of what my wife calls “toxic tourism” — the cancer alley chemical corridor along the Mississippi; the offshore oil platforms in the Gulf; the hazardous waste sites where Superfund materials from multiple states are dumped.

In 1990, for instance, I reported this page one story in the New York Times about communities being moved out of the way of big chemical plants. Late last month Elizabeth Kolbert published a piece in The New Yorker about how national efforts to control the Mississippi River are ruining Louisiana’s wetlands.

So it’s not hard to imagine my delight in visiting Avery Island and discovering the land and water conservation work, along with all the other absorbing features of the Lafayette region. The city and its surroundings are an American treasure.

Guided by Sheila Nichols, a family friend and Lafayette resident, we savored the Cajun flair of Steve Riley and the Mamou Playboys, said to be the best Cajun band leader in the business. We danced at La Poussiere in Breaux Bridge, one of the oldest and last surviving Cajun dance halls. The next night we danced to Zydeco, pumped out by legendary Geno Delafose and his band, at the Rockin’ Bowl, a combo sports bar, bowling alley, and dance hall in downtown Lafayette.

A city of nearly 130,000 residents and Louisiana’s fourth largest, Lafayette reflects the prosperity of its oil-influenced economy and the spirit of its native music. Unlike along much of the Gulf Coast, and especially in neighboring Texas, there are real people, out of their cars, and actually strolling on Lafayette’s sidewalks and mingling in its inviting downtown open air bars and restaurants.

On the Rockin’ Bowl’s dance floor another circumstance that is distinctive to Louisiana: white people danced with African Americans. Men and women, white and black, sometimes strangers to each other, danced together.

overlooked a lake that drained into a salt cavern in the 1980s, the result of an oil drilling mishap. The disaster carried away boats and a home, but fortunately nobody was killed. The restaurant served a very good BLT. And catfish and shrimp at Crawfish Town in Breaux Bridge was as good as they get.

Our two days of exploration included a swamp boat ride with Norbert LeBlanc, a bilingual Cajun tour boat operator with a handsome white beard, a weathered cap, and a bottle of homemade peach moonshine to treat his customers. We spent 90 minutes roaming the shallows and groves of Cypress trees of Lake Martin, some over 1,000 years old and all draped in beards of Spanish moss.

On the warming afternoon, alligators lazed in pools of glistening green algae. At one point we encountered a wary adult female, its snout and eyes visible only as menacing dark spots on the surface. She guarded her babies, each about eight inches long, resting on a nearby log.

We encountered big turtles gathered side by side on long logs, like Baptists in prayer. When the boat drew close they plopped into the dark water like plates tumbling off a table.

Cormorants and egrets wheeled in long looping flight. An osprey ducked away from its nest, a tangle of branches attached to the highest limbs of a dead Cypress.

Lake Martin itself is a conservation preserve area. No houses appeared on its shoreline. When LeBlanc shut off his outboard, an otherworldly quiet settled on the boat. A light wind stirred ripples on the surface, like a whisper.

I love to travel, which is one of the prime benefits for doing what I do. Travel draws close friends even closer. Travel invites surprise into your life. Travel produces experience and information. And travel revealed the Lousiana Gulf Coast in ways I never anticipated.

One thought on “Coastal Louisiana’s Garden of Alligators, Zydeco, and Conservation”