CHARLESTON, S.C. – Under powder blue skies in mid-March, a small crowd of local leaders gathered on Union Pier to formally announce a $2.4 million contract to design a new maritime gateway to this beautiful coastal city.

I lived in Charleston from February 1980 to September 1983, writing for The News and Courier, the local newspaper, and contributing as a freelance to Time Magazine, Southern Magazine, The New York Times, and other publications. Last month I returned to report for The New York Times, my favorite newspaper, on an intriguing dust-up over development, a classic Charleston dispute that encompasses the community’s insistent goal to achieve the most livable, beautiful, and prosperous place in America.

The winning assignment for the gateway, awarded to CH2M Hill, is to draw up plans that convert an empty 100,000-square-foot steel warehouse at the pier’s north end into a state-of-the-art $25 million cruise ship passenger terminal. The new facility replaces the existing 18,000-square-foot cinder block terminal, built in 1973, at the south end of the 67-acre Union Pier complex.

Scheduled to open in the fall of 2012, the new terminal is seen as an essential step in what the South Carolina State Ports Authority, the project’s developer, says will be a much larger demolition and mixed use development project that would divide the Union Pier complex in two. Twenty-two acres at the north end is reserved for the terminal and surface parking for cruise ship passengers. Some eight acres of pilings and concrete deck would be removed. And 35 acres of shoreline property with exquisite views of the harbor will be made available for private development.

“Our vision is to extend the city grid to the waterfront,” said Mayor Joseph P. Riley Jr., a 68-year-old Democrat first elected in 1975. “There will be a combination of public spaces, waterfront access, residential and commercial development. We have the conceptual plan. It’s the starting point for a new part of Charleston that begins along the water’s edge, and from there mixes uses in a low-rise 18th and 19th century scale city.”

But while Mr. Riley and port executives view the development as an opportunity to put an obsolete stretch of concrete to new uses, a group of influential opponents see a threat.

Their concerns center on precisely what the new terminal is supposed to achieve —  enhancing Charleston’s growing reputation as a destination and a home port for big cruise ships. This year the port anticipates 175,000 passengers from 90 cruises, up from 69 cruises and 111,000 passengers in 2010. 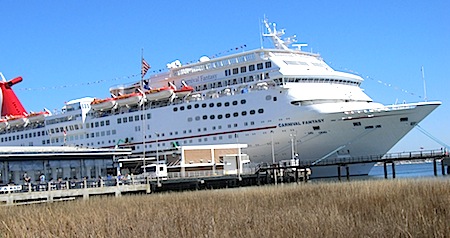