The one-foot waves today in the Gulf of Mexico were described as “tranquil” as BP started to lower a 70-ton case through 5,000 feet of water to contain the source of an oil leak that threatens the shorelines of four states. Guiding the steel cover over the well shaft in pitch-black waters at crushing depths, said engineers, is like floating a toy parachute off the Empire State Building and landing on a paperclip in the street. 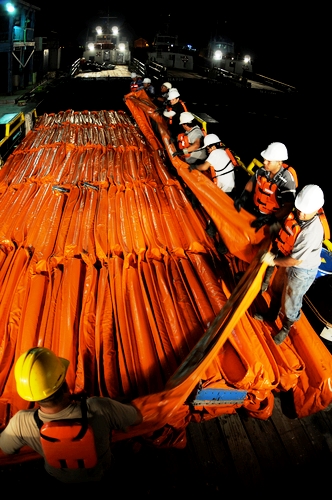 The political equivalent, of course, is what’s happening in the Senate with the climate and energy bill, which also is navigating in murky political waters and under enormous partisan pressure.

Senators John Kerry and Joe Lieberman, in a joint statement today, said they would introduce a comprehensive climate and energy bill next Wednesday. They said they would do so without the participation of Senator Lindsey Graham, the South Carolina Republican who has been working for months on climate and energy policy with his two Senate colleagues. Sen. Graham abandoned the effort last week over differences with Senate Majority Leader Harry Reid over timing of the floor debate on the Senate energy bill, and immigration.

Kerry and Lieberman Promote Climate Bill
Senators Kerry and Lieberman said they were enthusiastic about the bill’s chances. “The last weeks have given everyone with a stake in this issue a heightened understanding that as a nation, we can no longer wait to solve this problem which threatens our economy, our security and our environment,” said the statement. “Our optimism is bolstered because there is a growing and unprecedented bi-partisan coalition from the business, national security, faith and environmental communities that supports our legislation and is energized to work hard and get it passed.”

Carol Browner, the assistant to the president for energy and climate change, told Bloomberg Television, that the Gulf spill could help spur public support for the bill. “This accident, this tragedy, is actually heightening people’s interest in energy in this country and in wanting a different energy plan,” Browner said.

The Gulf spill did indeed provide fresh evidence of the dramatic consequences of the nation’s devotion to oil, and prompted grassroots demonstrations to encourage clean energy investment and to reduce oil demand in several Gulf coast communities and around the country. In addition climate science, which forms the research foundation for new policy that encourages the clean energy transition to curb emissions of greenhouse gases, also generated fresh attention this week.

Science Supported
On Friday, Science Magazine published a letter from 255 members of the National Academy of Sciences that stated “there is compelling, comprehensive, and consistent objective evidence that humans are changing the climate in ways that threaten our societies and the ecosystems on which we depend.” The letter, written in response to the December hacking of email messages from East Anglia University and other attacks on climate science, also called to an end to the “McCarthy-like threats of criminal prosecution against our colleagues based on innuendo and guilt by association, the harassment of scientists by politicians seeking distractions to avoid taking action, and the outright lies being spread about them.”

Politics and Oil
The letter also came as Virginia Attorney General Ken Cuccinelli targets Michael Mann, a prominent climate scientist and former faculty member of University of Virginia. The attorney general is demanding that the university turn over e-mails and other documents that involve Mann’s research and contacts under a statute that is designed to detect fraud in government contracts, an action the Washington Post called “chilling.”

The targeting of climate scientists by political opponents is hampering action on the climate and energy bill. So is the Gulf spill and its long streams of oil the color of dried blood. Early in the week Democratic Senators Robert Menendez and Frank Lautenberg of New Jersey, and Bill Nelson of Florida held a news conference to alert their colleagues that any provisions that expand offshore oil exploration have no place in a comprehensive climate and energy bill. By the way, those one-foot waves? Winds and waves are expected to pick up considerably over the weekend.

One thought on “Oil Devotion Could Mean Climate No Motion”